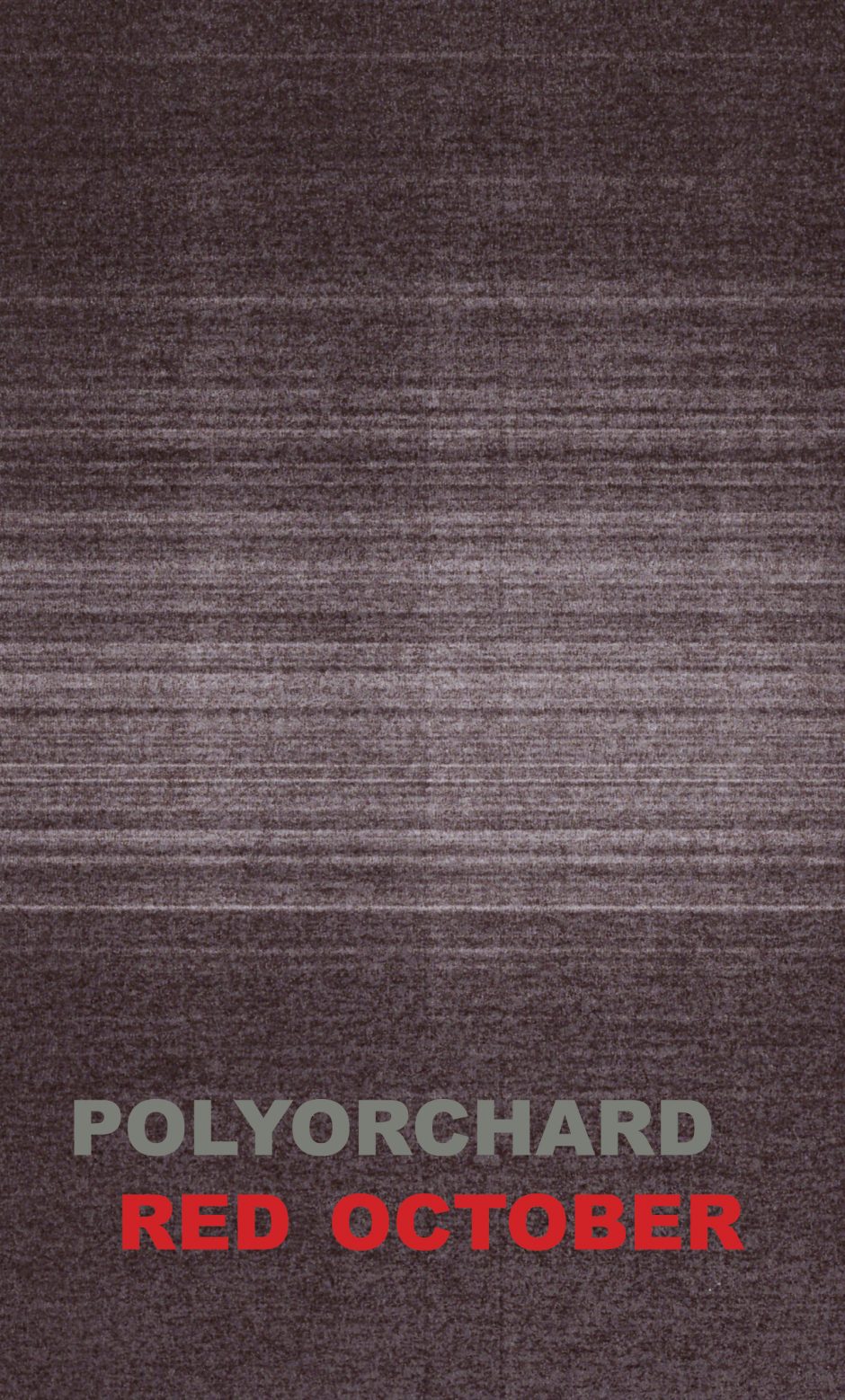 available October 15, 2017 from Out and Gone Music
Red October is the new live album from Polyorchard, featuring the quartet of

Recorded live in concert in the basement at Neptune’s Parlour (barely more than a week after the studio sessions that resulted in the previous album Color Theory in Black and White), the quartet spins ideas with the tensile strength and malicious beauty of a spider working alone in the dark. Polyorchard is a flexible fighting unit, expanding and contracting as needed to face the battle of the day. The Red October quartet features players who have been the foundations for several strains of Polyorchard since its inception in December of 2012.

Red October is available from Out and Gone Music as a limited edition cassette or download. polyorchard.bandcamp.com/album/red-october

Within seconds of listening to Red October, I felt as though I was the steel ball in a pinball game – the subject being manipulated inside of a glass box. I’m not suggesting cheap entertainment, but rather implying that, like the steel ball, this album propels you into the playfield: targets, holes and saucers, spinners and rollovers, gates. The gate motif often represents an entrance and an exit, a passage to a new beginning, and there are clear moments of a sounding procession throughout this album. Red October produces infinite possibilities of sound, and can be heard and experienced in infinite ways. There is an energy that consumes your consciousness, traps you in your own mind, and releases you as a means to undergo a transformative experience.

Perhaps Gaston Bachelard’s question featured in The Poetics of Space applies here, “In this drama of intimate geometry, where should one live?”

…the group displays a bold commitment to the practice, not the genre, of improvisation. The distinction is a subtle but crucial one.

Where many free improvisation performances can fall into a predictable dynamic pattern of peaks and valleys, Polyorchard crafts intricate forms with clear but idiosyncratic arcs. Each extempore arrangement is packed with surprise. Just when they seem to be building in intensity and volume, they might cut it off before it boils over, as they do in the middle of “Montana.” They also avoid the exploratory feeling-out stage that improvised settings often produce. At the opening of “Seen” Menestres throws down a challenge in the form of a tense, rapid-fire phrase, which in turn sets the tone for the entire piece.

Throughout these performances, dialogues quickly emerge within the turbulent flow then just as quickly dissipate and reform somewhere else. “Have” starts as a slow duo between bass and trombone on a melodic theme, but gradually disintegrates into particles of rough-hewn, pointillist sound, only to coalesce for a brief instant in a stomping groove. Even the intense conclusion of “Like” finds Bishop and Estoppey crafting tart melodic phrases around the scabrous interplay of Menestres and Galvin.

The group also resists the enormous gravity of the horns–bass–drums format, rejecting all easy solutions to spontaneous group from. There are no drones, no genre/historical references (at least explicitly), and no resorting to high-intensity, free-jazz style blow-outs. This lack of shortcuts makes for a prickly, armored music but also a robust one. Even the more subdued passages, such as as the near-dirges that open “Montana” or close “I Would,” burn with a special intensity. Though their interaction might at times echo some earlier group (I hear the volatile, near-vocal dynamics of Charles Mingus’ classic Candid quartet in the middle of “Like”), they still retain their own voice, the specturm of improvised traditions deeply internalized.

One key to the group’s sound is how they reject any hierarchy of instruments. Trombone, sax, bass, drums are, simply put, just devices for sound production, there to create a complex weave of interaction in which the traditional capabilities of the instruments are honored as well as extended. On the conclusion of “Like” the group creates a mix of proto-electronic textures, while on the opening of “To” they turn to vocal timbres and, in Bishop’s case, even some slow legato melodies. On the outro of “Montana” they take this even further, emitting all manner of wheezing, hissing and moaning in a secret, sublingual ritual.

It should be noted here that Red October contains, in Menestres’s own words, “no previously agreed upon material.” Since this performance was recorded, Polyorchard has expanded its repertoire to include performances of text scores and compositions for field recordings and improvising ensemble, a move that can only enrich their already extensive improvisational lexicon. Yet Menestres’s statement is still somewhat jaw-dropping. After a good two months of visiting and revisiting this record, new aspects emerge on every listen, the band’s ability to create spontaneous structure consistently fascinating, and more than a little befuddling.